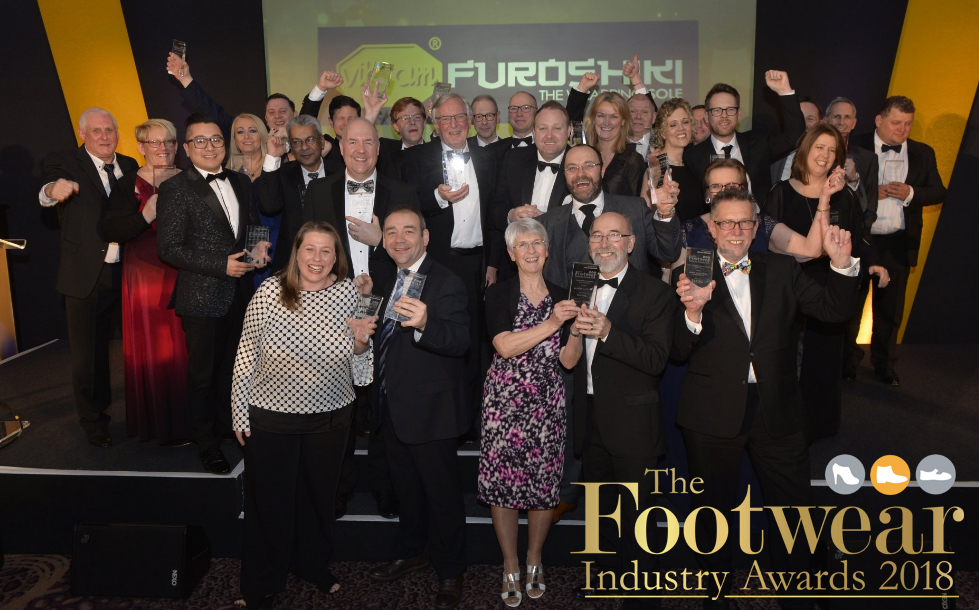 The very best from across the footwear sector gathered at Birmingham’s National Conference Centre on Sunday 18 February to find out who would be taking home a prestigious accolade at the seventh annual Footwear Industry Awards.

Organised by Datateam Business Media, publisher of Footwear Today magazine, and supported by the British Footwear Association (BFA), the Independent Footwear Retailer’s Association (IFRA) and the Society of Shoe Fitters (SSF), the Awards recognises and rewards the brands and individuals that make the sector so vibrant.

The evening began with an exclusive cocktail reception, giving guests the chance to catch up with industry friends and colleagues, before the ceremony opened with a stand-up routine by critically-acclaimed comedian Sean Collins.

After dinner, the evening’s celebrations continued with the Retailer categories.

In the Multiple Footwear Retailer of the Year category, Johnsons Shoes/Bowleys Fine Shoes came out on top and the Society of Shoe Fitters presented its Student Shoe Fitter of the Year award to Shah Nawaz Kahn of Hotter.

The evening’s presentation concluded with the Industry awards, which saw Ghetz’s Gerry Walker take home the Platinum Shoe Award and Skechers pick up its second of the night in the Leader in Customer Service category. Gardiners were also presented with two awards, picking up Best Use of Technology/E-Tailer of the Year while Mark Flenley of Gardiners was honoured as Footwear Designer of the Year. Marcus Baker of Legero was presented with the coveted Personality of the Year award, and last but certainly not least, the winner of Shop Front of the Year was revealed as SoleLution.

The Footwear Industry Awards continued its time-honoured tradition of giving back by carrying out a charity fundraiser for Footwear Friends, which has been supporting the sector for over 175 years, and The Bobby Moore Fund, which funds pioneering, life-saving bowel cancer research. Throughout the evening, guests gave generously and rose a generous amount for the two charities.

For more information and to browse the Footwear Industry Awards gallery, visit www.footwearindustryawards.com.