Secure your spot at the Footwear Industry Awards

With just over a week to go, tickets for this year’s Footwear Industry Awards are nearly sold out. The event will take place on Sunday 18 February at the National Conference Centre in Birmingham, formerly known as the National Motorcycle Museum.

Designed to celebrate excellence in the footwear sector, the Footwear Industry Awards recognises the retailers, brands and people that make the industry a success. Attended by some of the biggest names in the market, prospective attendees are advised to book now to avoid disappointment.

Attending the Footwear Industry Awards is not only a chance to see this year’s winners announced, but is also the perfect environment 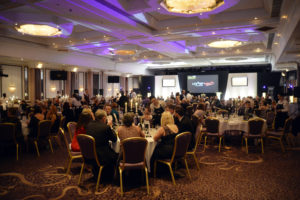 in which to network and form vital industry connections. Retailers and brands alike can interact and create new business contacts in a relaxed yet business-like environment. Bringing together the people at the heart of the industry, the event is attended by companies large and small, offering a wide range of networking opportunities.

Event manager Sue Wiseman comments: “Every year, retailers and brands come together at the Footwear Industry Awards to catch up with old acquaintances and meet potential new clients. The Awards scheme is committed to representing everyone in the sector, from independent start-ups all the way to multinational businesses. Ultimately, we strive to reward hard work and success at any level and the level of engagement at the Awards reflects this year upon year.”

Chris Wilson, managing director at Vibram UK highlights the benefits of attending the event: “Everybody involved in the trade should be pro-active and get involved with the Awards. It is a great opportunity to celebrate innovation, branding and customer service, plus it’s always good to give your colleagues a pat on the back, so book your tickets and attend the Awards gala to cheer them on!” Vibram UK is sponsoring the candelabras at this year’s event. 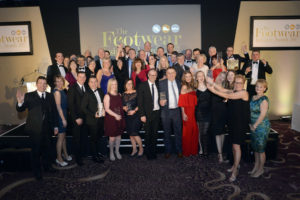 Similarly, Chris Gorrod, managing director of Brevitt Rieker reiterates the value of the Awards: “Rieker is once again delighted to be involved as a sponsor of the Footwear Industry Awards. The event is a wonderful opportunity for the trade to get together and celebrate all that is good in the Footwear industry.

“It is one of the rare opportunities that retailers and suppliers can all get together at one event and so the networking opportunities are huge, but more importantly a great night can be had by all.” Rieker and Remonte are sponsoring Multiple Footwear Retailer of the Year.

Your host for the evening…

The Footwear Industry Awards 2018 will be hosted by critically-acclaimed comedian Sean Collins.

After a decade in the UK, Sean is now firmly established as a club and comedy festival favourite. He’s a regular at the London Comedy Store and his Edinburgh shows frequently gain critical and audience praise, including ‘Best of the Fest’ accolades and he has appeared on Michael McIntyre’s Comedy Roadshow.

A ticket to the Footwear Industry also includes:

Tickets can be booked online at www.footwearindustryawards.com. Alternatively, contact Sue Wiseman on 01622 699185, 07712 415 437 or email swiseman@datateam.co.uk to secure your spot today.

In addition to Skechers as headline sponsor, The Footwear Industry Awards 2018 also has the backing of Cherry Blossom, Froddo, Hotter, Moda Footwear, Petasil, Rieker and Remonte, Superfit and Legero and Vibram Furoshiki. The Awards is supported by BFA, Footwear Friends, The Society of Shoefitters (SSF) and Footwear Today magazine.