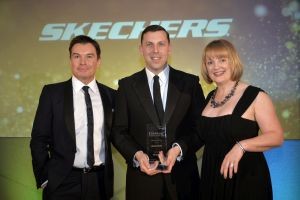 LONDON, UNITED KINGDOM – February 24, 2016 – SKECHERS USA, Inc. (NYSE:SKX) today announced that the Company has been named Brand of the Year for the second year in a row at the 2016 Footwear Industry Awards. SKECHERS was also awarded Ladies Brand of the Year; a commendation for Fashion Brand of the Year following the Company’s 2015 win in the category; and multiple honors for its sales team, including the Platinum Shoe Award and Personality of the Year Award.

“We are incredibly honored to have the Footwear Industry Awards recognize SKECHERS as a continuing leader in lifestyle, fashion and women’s product,” commented Peter Youell, Managing Director of SKECHERS U.K. and Ireland. “These awards are a testament to the growing appeal of SKECHERS and its product to millions of consumers in the U.K. and Ireland, and the ongoing support from our retail partners to reaffirm and elevate our brand as an in-demand lifestyle and fashion footwear company. This recognition further propels us to deliver innovative footwear and to continue to build SKECHERS throughout the region.”

“Skechers has never looked better – from a product and marketing perspective – and our strong sales growth in the U.K., Ireland and around the world allowed us to reach a new annual sales record in 2015 of $3.15 billion,” added SKECHERS S.à.r.l. managing partner Marvin Bernstein. “This prestigious Footwear Brand of the Year award and our recent Company of the Year award from Footwear Plus in the U.S. are key indicators of our strength in Europe and abroad. To continue on our positive momentum in 2016, we look forward to delivering more fresh product to the marketplace and supporting it with incredible campaigns that include celebrated brand ambassadors and influencers Demi Lovato, Meghan Trainor, Kelly Brook and Ringo Starr.”

The prestigious annual awards event was held on Sunday, February 21st during the Moda Footwear Show and was organized by Datateam Business Media with the support of the British Footwear Association (BFA), Independent Footwear Retailers Association (IFRA), The Society of Shoe Fitters and Footwear Today. 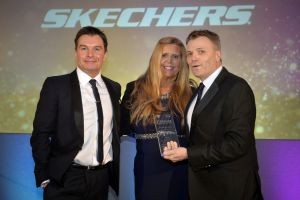