Footwear Industry Awards turns five with a gala to remember

Surrounded by the industries’ crème de la crème, a record number of guests celebrated the achievements of the past year at the 2016 Footwear Industry Awards. Hosted by Capital Radio’s No.1 drive time host, Greg Burns the awards returned to the National Conference Centre on Sunday 21st February.

Guests from all over the county were welcomed to the award’s favourite venue with a luxury cocktail reception, sponsored by Cherry Blossom. For its fifth anniversary, the awards had a record breaking year. Commenting on the night, event director Paul Ryder said: “The National Conference Centre has become the home of the awards, and with over 200 people attending, there was a significant increase on previous years. It was also great to see a number of new companies embracing the awards, as well as returning familiar faces, demonstrating the strength of this event in the Footwear Industry calendar. 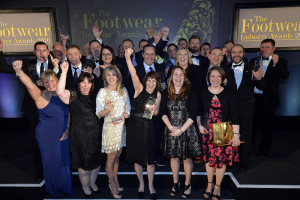 “These awards are designed to shine a spotlight on the UK’s most outstanding retailers for ensuring that the end user, the consumer, gets the service, quality, style and functionality they expect.”

Editor, Cheryl Taylor said: “The footwear trade rose to the challenge for the 2016 awards. With a record number of entrants, votes, Shop Front entries and the attendees on the night, the awards are a testament to how active and involved the industry is.”

The audience where certainly involved on the night! Greg started the night with topical satire, interacting with several members of the audience, followed by the first set of awards with guest presenters including Milly J of Milly J shoes, the Designer of the Year 2015 and BFA’s John Saunders. 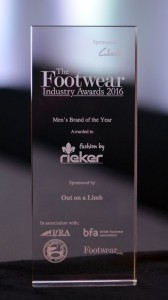 Pledging their support, the British Footwear Association (BFA), Independent Footwear Retailers Association (IFRA) and the Society of Shoe Fitters (SSF) all had representatives attending the event. BFA chief executive, John Saunders said: “I was very pleased to be able to attend the FIA awards on Sunday evening. It was pleasing to see the event being so well supported by companies, brands and key figures from across the UK footwear industry.

He continued: “The awards give us a rare chance to celebrate all that is great about the UK industry and to recognise the brands and individuals that continuously contribute to the success of the sectors. In an increasingly changing and competitive world, I was particularly proud to be called on to present the Award for the Best Multiple Retailer to Graham Parkin of Johnson’s of Teddington – a fantastic business with a great history of selling quality footwear and a deserving winner.”

Commenting on behalf of IFRA Michael Donaghy said: “IFRA was delighted to be associated with such a successful and well organised event, the range of retailers there on the night and the quality of finalists reflected the wide spectrum of shoe retailing. I think everybody enjoyed the night and are looking forward to next year.”

Laura West, Secretary to The Society of Shoe of Fitters said “Another wonderful Awards evening organised by the amazing team at Footwear Today magazine.  Seeing retailers chatting and laughing with their suppliers in a relaxed atmosphere is the very best way to do business, create firm working relationships and make new friends.  Having the time to network is rare and for the Society of Shoe Fitters the event is invaluable in informing the industry about what we are trying to do for it.  It is also a chance to reward those who are true professionals.  We can’t wait until next year!”

The awards continued into the night as more winners were announced. Independent retailers enjoyed the fruits of their labour; Jakes came Highly Commended in two categories and also won Children’s Independent Retailer of the Year.

Skechers had a successful evening picking up 3 awards in total including: Ladies Footwear Brand of the Year, Footwear Brand of the Year, and Simon Baker who scooped the prestigious Personality of the Year. Commenting on the awards Peter Youell, Managing Director of SKECHERS U.K. and Ireland  said “We are incredibly honoured to have the Footwear Industry Awards recognize SKECHERS as a continuing leader in lifestyle, fashion and women’s product. These awards are a testament to the growing appeal of SKECHERS and its product to millions of consumers in the U.K. and Ireland, and the ongoing support from our retail partners to reaffirm and elevate our brand as an in-demand lifestyle and fashion footwear company. This recognition further propels us to deliver innovative footwear and to continue to build SKECHERS throughout the region.”

The Footwear Industry Awards where backed by a range high profile sponsors, including Cherry Blossom, GRS Footwear, HB Shoes, MODA Footwear, Out on a Limb, pediped, Rieker, Shoestring Ltd, Skechers and Superfit Legero. Gore-tex also supported the awards by providing half of the holiday vouchers for the winner of Shop Front of the Year.

Clarks was lead sponsor, who picked up two awards themselves including; Children’s brand of the Year and Comfort/ Wellness Brand of the Year, Sales manager for the UK, Victoria Frayne said: “Clarks is proud to be the lead sponsor of the Footwear Awards 2016. The event provides an excellent opportunity for both Independent and multiple retailers to come together and celebrate successes within our industry.”

As the evening drew to a close, live band, ‘Smoking in the Boys Room’, sponsored by Superfit Legero, made an appearance after the awards presentation, keeping the guests dancing until late.

The night was also a success for the two chosen charities; Footwear Friends and Macmillan who will split the total £1131 raised thanks to the generosity of the attendees.  The heads and tails was also very engaging with two successful winners winning a night at the Forest of Arden Hotel and Bobby Moore Club Wembley tickets.